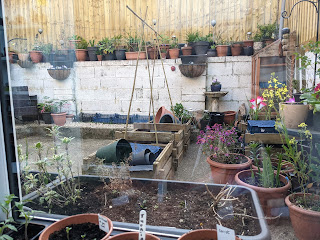 Growing space is limited in my courtyard garden but i was recently offered some easy build planters for free which would give me addition space to grow. As the planters were adaptable i had the option of building 5 lower planters or 3 taller ones. As you can see i grow mainly in pots in my courtyard and have only a small run of ground that is healthy enough to grow directly in, i top it up with compost each year to improve the nutrients for the tomatoes that i plan yearly in the space. I have baskets over that area at the moment to stop the local cats using it as a litter tray. 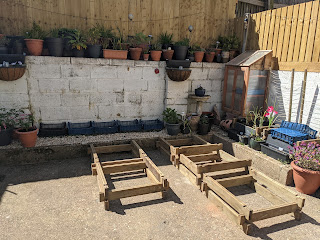 I liked the idea of having 5 planters as it would give me plenty of space for growing but after considering the types of plants i wanted to grow and the lack of space that would be left in the courtyard i opted to go for 3 higher planters. (as shown in the first photo) Having three taller and deeper planters mean i can put in plants that like more space for their root systems. 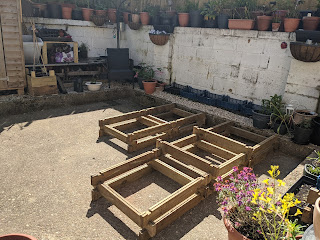 I've put up some canes to create a vertical growing support and i will hopefully be growing cucumbers vertically this year, I've been watching Youtube videos about vertical growing and love the way it saves space and how it can promote healthier plants too.

I can't wait to start putting out some of the plants i have growing in my greenhouse (conservatory) at the moment it is still very cold in the evenings so i'm holding off putting them out yet.

Garden Grow your own Planters Updates