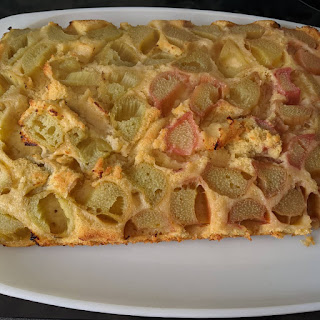 Our homegrown rhubarb is doing really well this year so much so that I've already harvested enough to make crumble, syrup & now cake!
I had never made a rhubarb cake before and after spending a little time researching my options and recipe ideas I decided to make up my own using a basic cake recipe I often used.
I opted for an 'upsidedown' style cake. I used a large baking tin (that we usually use for tray bakes) I filled the base of the tray with sliced Rhubarb. Then I sprinkled a thin layer of sweetener for sweetness as often rhubarb can be tart so I wanted to make sure it was nice and sweet for a cake topping. 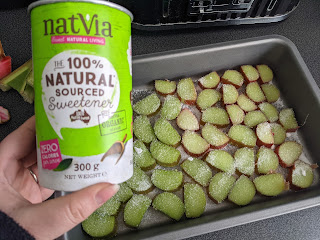 Next I made a basic cake mixture with 200g self raising flour, 150g sugar, 3 large eggs, 150g butter & a splash of milk. Once mixed I put it on top of the rhubarb.
I put it into the oven at 180 for 15mins before taking it out, turning it upside down on an oven proof dish and putting back in the oven for a further 10mins. I did this to dry out the top as obviously as the rhubarb cooks it releases water so can sometimes make the surrounding cake mixture soggy.
I wasn't sure if this method and recipe would work but it did, really well! It tastes fantastic.
I'll definitely be making it again when I harvest more rhubarb.
Baking Food & Drink Recipes