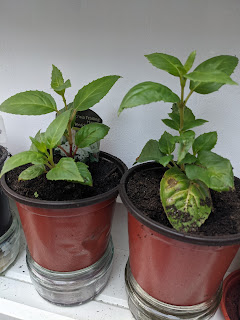 I purchased three fuchsia plug plants back in March from a local garden center, they were all the same size when i purchased them two were trailing variety and one was an upright. I kept the upright inside but put the trailing two out in their baskets as advised. I noticed though after a while that the fuchsia kept inside was doing much better than the two outside.

The two outside didn't grow at all so at the start of May i dug them back out of their baskets, put them into pots and brought them back inside. Within just two weeks they have doubled in size, i'm so pleased that they survived the move and seem to be much happier inside. I'm going to keep them in now until they are much more established before putting them back out in their hanging baskets.

The upright, who started life inside, has done amazingly well, i put it outside when i brought the other two in (first week in May) and it seems to be thriving outside, still growing and very close to flowering now. I don't know if these two will grow big enough to flower this year or not now, i'll keep an eye on them and see.

Lesson learnt though, keep plug plants in until they are a good size otherwise they just won't grow!
Flowers Fuchsias Garden Plug Plants