If you've read this blog before you'll know I'm keen to learn as much as possible about preserving food to avoid waste. Dehydrating food is something I've been doing for a while now but there is always more to learn. 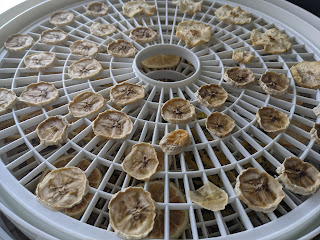 This week I decided to attempt drying multiple fruits in one session, I wanted to ensure that the dehydrator was full before putting it on and wasting electricity with it only being half full.
I didn't have enough of all one fruit, like apple for example which my children always want me to make more of so I checked through the fruits we did have and chose the ones that were slightly less perfect and the least likely to be chosen to be used fresh.
As you can see in the first photo I managed to get quite a bit done, all at the same time and on the same setting 70c for 8hours
Lemon
Apple
Pear
Kiwi
Banana

I was really impressed with how the lemon slices kept their colour. These are really popular dried around xmas used as decorations or I can use them in cooking / summer drinks. 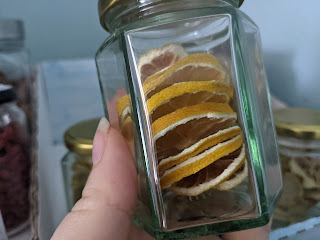 When doing the the apple this time I left the skin on, usually I peel it and dry it separately to make apple powder but I wanted to see if the kids liked dried apple with the skin on. If they don't I will use this batch for cooking and take it off next time.
This was my first time dehydrating pear, I'm not sure if the boys or I will like it but its worth a go. If we don't like eating it as it is i can use it in cooking.
Kiwi was a success last time i dehydrated it, my youngest son enjoys it so I've done that again.

Banana it usually a hit too, my eldest son doesn't like banana fresh but for some reason enjoys dehydrated banana 'chips' as he calls them.

If you have any recommendations of what food to dehydrate next please let me know.