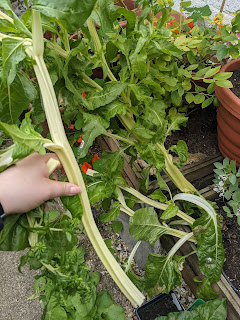 When the weather gets warmer Swiss Chard tends to bolt. The stems shoot up and start producing flowers and smaller leaves. This is the point at which most people would take up the plant and dispose of it (compost it) to use the space for something else.
This year I wanted to experiment and see how what I do effects the plant itself, as a perennial plant Chard should continue to return each year. I want to know whether how I treat the plant during the non-edible stage will have any effect on the follow years growth and crop.
I've got a few different chard plants at both my allotment and my courtyard garden so this gives me the opportunity to experiment.
One of the things i wanted to do was to chop back the bolted stem and see what the plant does one the stem has been heavily chopped back. I didn't want to just chuck out the bolted chard stem though, I wanted to find out just how much or it was edible.
After a little research online to find out what is and isn't safe I went into the courtyard and chopped down one the of the bolted chard. I carefully removed the smaller leaves as these are perfect for using in salads and popped them into the fridge (after washing) to keep them crisp. I cut the bolted chard stem into pieces and brought it inside to test which parts were and were no edible.
It is actually quite easy to work out which parts are edible and which are not with bolted chard stems.
Firstly you can test by chopping with a sharp knife, on a chapping board.
If the knife cuts through the bolted chard stem like it would a stalk of celery, easily without too much pressure, then it is likely safe to eat. If you are unable to chop the bolted chard stem easily it is too woody and is not edible. (Take a look at this short video to see what I mean)
The next test is to taste a piece of the chard you have been able to chop easily. If it is bitter then it is not safe and needs to be disposed of / composted. If it tastes like chard / celery then it is safe. Continue to cut pieces, I usually do them about 1cm thick, and pop them into a box or bag. You can then use them in soups and stews. I usually freeze the chopped chard stems and take out a handful for cooking with as and when needed. 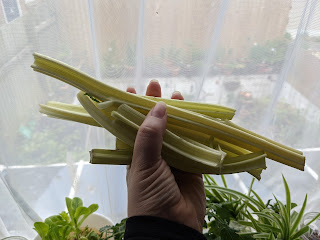 If you'd like to see a short demonstration video of me testing bolted chard stems, click here.