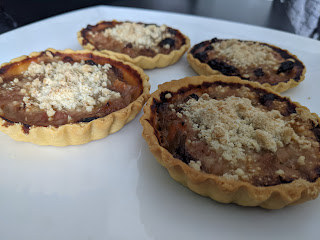 Looking for something new to make with your homegrown rhubarb? Here is an easy and tasty idea. Yummy little rhubarb and raisin crumble tarts, they can be eaten hot or cold and go perfectly with custard or cream.

When I create recipes or adapt ones in books I often forget to note down the amounts of each ingredient and weights, so this will be a very rough guide on how to make these. Hopefully though you will get the idea.

I chopped up 6 stalks of rhubarb cut freshly that day from the patch on the allotment. I chopped them approx. half an inch thick and popped them in a pan with just an inch of water at the bottom. I added two table spoons of sugar and let the rhubarb simmer until soft.
Once soft and cooked down I realised there was slightly too much water and rather than drain it off and waste the flavour it was at this point I decided to add in some raisins, or in my case some 'mixed dried fruit' as this is cheaper to buy but has raisins in. I added just a handful and this helped to soak up the extra water while also adding more fruity flavour. 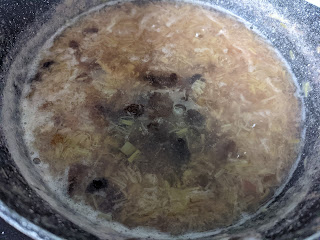 My husband had pre-made me some small tart bases (using a basic flour, butter and water recipe) which had been baked and were cool. I had planned to use them all for something different (chocolate and peanut butter tarts!) but when I harvest the rhubarb I thought I would give these a go. I added two table spoons of the rhubarb and raisin mix to eat tart case and then topped each with a sprinkle of crumble mix (basic flour, sugar and butter mix) 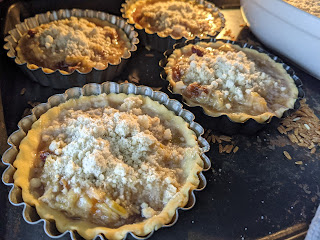 I popped them in the over for around 25mins. A couple caught slightly on the edges but this didn't effect the taste. I would probably only do 20mins next time though. 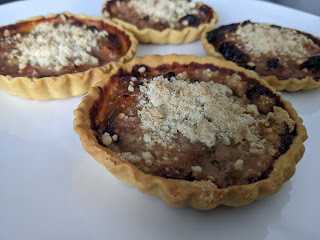 Though I made these as small individual tarts one large tart could be made which could then be cut and served. I prefer making small individual ones as it is less messy when it comes to serving, no cutting up slices just pop them in a bowl or on a plate. 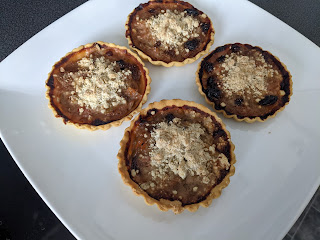 There was so much of the rhubarb and raisin mix left that I had plenty to also make a large crumble too. My family love crumble as a pudding. If making more that one at a time and you are worried you won't eat it in time you can freeze them either before cooking or after (as long as you cool it first) Just cover with tin foil and pop in the freezer, they last at least a couple of months. Then pop in the oven to bake when you want to use it. 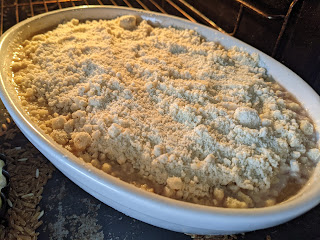 Here is one of the darker edged tarts served with some cream. Though the dark edges may look off putting they don't effect the taste, if anything they have a slight caramalised taste. 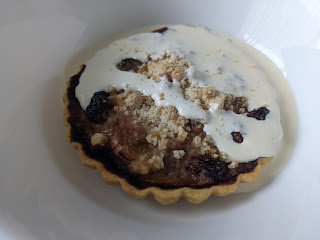 I'd highly recommend giving these little Rhubarb and Raisin Crumble Tarts a go if you have some home grown rhubarb to use up.